…as over 1,300 beneficiaries maximally impacted.

The wife of the Governor of Akwa Ibom State, Her Excellency, Deaconess Martha Udom has described the chairman of Ikono Local Government Council, Hon. Itoro Columba as one of the very best in a time like now. The Governor’s wife made the statement at the Primary Health Center, Nung Udoe Itak, ward eleven during a four-day ‘Martha Udom Medical Outreach’ hosted in Ikono by the council Chairman who provided remedial healthcare lift to the good people of Ikono Local Government Area. 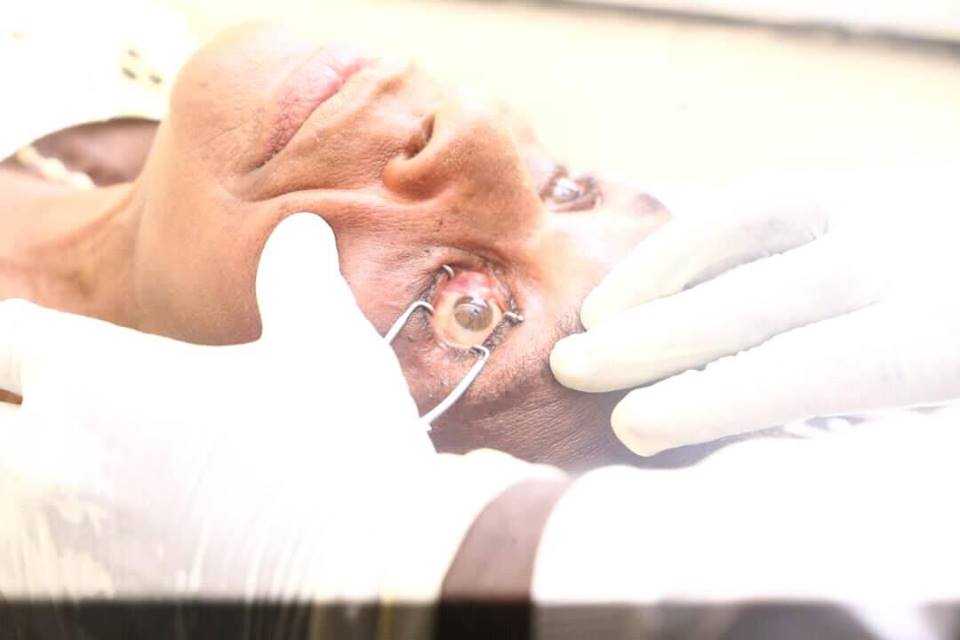 A four-day intervention exercise which took place in two different wards with medical personnel selected within and outside the state, also celebrated the wife of the Governor with a portrait, as a woman who means well for the good people of Ikono, being the first family of the state. The activities commenced with a formal flag-off ceremony by Her Excellency in ward eleven on 23rd-24th October for the 1st phase, and ended in ward ten on 25th-26th October in grand style.

The governor’s wife who was represented by the Honourable Commissioner for Women Affairs & Social Welfare and Dean of Commissioners in Akwa Abom State, Dr. Glory Edet, appreciated God for the vision given to the host and commended the initiative of the chairman saying, it was pertinent for other political office holders to duplicate similar empowerment programme by giving free health services to the society. The Governor’s wife likewise considered the programme as one capable of eradicating hunger and thirst for healthcare delivery in many poor homes because of money.

Speaking through the Commissioner, she said, “I’m here for the flag-off ceremony on behalf of the mother of Akwa Ibom State who could not be physically present for some unavoidable reasons. God has never made a mistake, that is why the governor recognizes health as one of the most important areas of life by renovating and equipping Ikono General Hospital in Ibiaku Ntok Okpo. This focus on wellbeing of every AkwaIbomite is a clear picture why Her Excellency places much importance on health services in the State.” 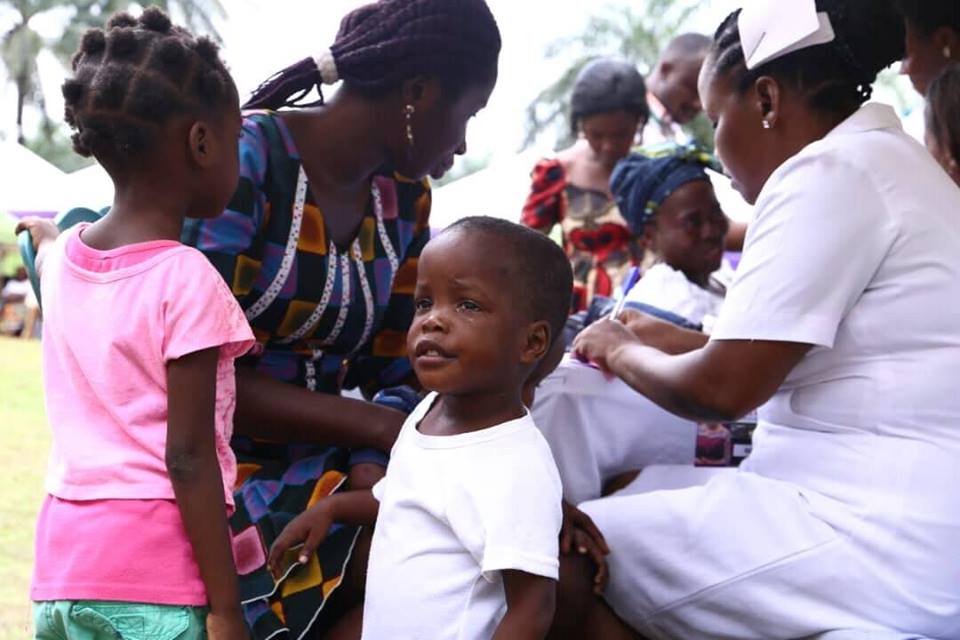 “I want to thank our mother of the state for collaborating with the council chairman to stage this medical outreach. This is what she has been doing since 2015. I therefore implore you to vote PDP in next general elections, because God brought the Governor, and no one can stop it. When God says yes, no one can say no.”

Speaking further, Her Excellency appreciated all the traditional leaders for showing up at the event, and seized the opportunity to advise the beneficiaries to see the medical empowerment as gesture that must be valued no matter the size of treatments, she described the exercise sponsored by the chairman as giving hope to the common man, she also rated him high amongst other chairmen in the State going by his performance since assumption of office.

“With due respect to all the traditional leaders here present, I’m equally happy that you are here. When one plans an event of this magnitude, and sees the presence of fathers, it goes to interpret the success of the programme already. I recognize the party and members of the state executive of the party. Let me also tell you, that your council chairman is one of the best chairmen in the State. That equally proves, Ikono people didn’t make a mistake by electing him at this time. As we flag-off this medical outreach today, I charge you to appreciate the medical provision, no matter how small.”

“Once again, Her excellency appreciates you for your dedication and cooperation.” The commissioner added.

Speaking earlier, the council helmsman, Hon. Itoro Columba admired the participatory spirits displayed by natives of the cradle land in their massive turn out at the event.

He said, that the programme was in recognition of the love and dedication shown to Ikono people by the First family of the state, by ensuring that there is elimination of health problems. The chairman also treasured Mrs Martha Udom Emmanuel, the wife of the governor for safeguarding the wellbeing of every indigene in Akwa Ibom State through the medical outreach.

“Ladies and gentlemen. I’m very happy that we are here today. It is on record that it was during when our father, Obong Goddy Umoh, was then commissioner in the Ministry of Economic Development, that he attracted this health facility to this community. And it is on record too, that this is the second time, I still remember four years ago; at the time I was running the bridge TV show, then I was not in government, when we used this same ground on our 7th years anniversary. We used this same facility to float a one-day free medical outreach with over 300 beneficiaries.

“Let me say, that all what you see here are courtesy of our governor who is the governor from PDP.”

“I’m happy that all of you came out to participate in this free medical. This is a way to say, thank you for supporting Mr. Udom Emmanuel. What you have seen here today is at the bidding of Governor Udom Emmanuel and his wife.

Ikono council boss used the platform to canvass and reaffirm Ikono People’s support for the State Governor, saying that only PDP was able to float such medical outreach programme in Ikono. He also appealed for the establishment of atleast one public secondary school in Itak community, he promised to work together with members of the community for the actualization of divine mandate back to the hilltop mansion come 2019 general elections.

“This exercise is continuous and we will endeavour to cover all the wards of Ikono in due course. As you get these free drugs, pray for the governor and his dear wife. My duty is to continuously attract dividends to my people as chairman. I hereby appeal to His Excellency, the governor to establish at least one public secondary school in Itak to carter for the 16 gazetted villages in the area.”

“The whole of Ikono has resolved to give hundred percent votes to the governor come 2019. There is no other party in Ikono. We must return the PDP, so that these goodies can continue.” He added.

The thoroughbred media entrepreneur tuned politician, also encouraged all the indigenes of the community to take advantage of the opportunity. According to him, no one will be left behind even after the exercise is ended. He therefore extended the surgeries till Saturday, 27th October, necessarily for all the special cases that required attention.

Also speaking at the event, the State PDP Legal Adviser who doubled as chairman on the occasion, Obong (Barr) Goddy Umoh, lauded the governor on his level of achievements in the state, and solicited for votes on behalf of the governor come next general elections.

“Your Excellency. Two to three weeks ago, you were equally there at the primary school during insecticidal treated net distribution exercise, still to talk about health. This goes to prove that you are doing very well. We have never had the level of development we have now, except under Deacon Udom Emmanuel. And I want to thank the council chairman for realizing his dream on free medical outreach. Since I born, I have never witnessed it before. This is only possible, because we have a personality of Udom Emmanuel as our governor.”

The second phase was a double-edged event between 3rd and 4th day, with the inauguration of Primary Health Center in Ikot Onwon Ediene, ward ten by the Honourable Commissioner for works, who was represented by a former Chairman of Ini Local Government Council, Elder Hon. Etetim Anwatim. The inaugurated health facility is currently running with full laboratory activities where tests and diagnosis are carried out, as personnel deployed to commence full operations.

Highpoints of the ceremony were; Dedication of the medical empowerment programme to God by Evang. Emmanuel Inyang, Presentation of Portrait to Her Excellency, Mrs. Martha Udom Emmanuel by the council chairman.

Fifty medical personnel within and outside the state which included; Nurses, Pharmacists, FHI 360 staff, Medical Doctors were applauded by the council chairman for excellent service delivery. The coordinator of all the experts, Dr. Unyime Udo-Umoh who is chairman, Akwa Ibom State Primary Healthcare Management Board, was on hand to render first-class medical attention to both natives and non-natives of different neighboring communities residing within Ikono.

The massive medical intervention exercise conducted in both wards, had over one thousand, three hundred beneficiaries turned up in a span of four days to have a feel of philanthropic touch of Governor Udom Emmanuel and wife in Ikono.

Others were; Councilors of all the wards, Supervisors, Special Advisers in the council, party stakeholders, Community Women Leader, Community Youth Leader